The Central Bank of Venezuela is exploring whether to hold Bitcoin and Ethereum in its international reserves. The cryptocurrencies would be used to circumvent international sanctions and pay state-run oil company debts, the report revealed.

Apart from the political upheaval brought on by contested president Nicolas Maduro, Venezuela has been struggling with an economic crisis unseen in the past 30 years. After international sanctions were imposed on the country following the 2017 protests, Venezuela has been trying to find ways around the restrictions.

The surprisingly tech-forward country planned on launching its sovereign cryptocurrency—the Petro—last year but managed to attract only more controversy. But, the troubled country seems to be sure that cryptocurrencies are the solution to its money woes.

Sources close to the Venezuelan government told Bloomberg that the country’s central bank is currently “running internal tests” to determine whether it can hold cryptocurrencies in its national reserves.

Bloomberg also revealed that the state-owned oil and natural gas company, Petróleos de Venezuela, owns reserves of both Bitcoin and Ethereum. While sources didn’t reveal how the company came to own the cryptocurrencies or how much of them it has, they said that was Petróleos that initiated the central bank’s crypto efforts.

The company is reportedly looking to send their crypto reserves to the central bank and have it pay its suppliers with Bitcoin and Ethereum.

Government coffers could soon be filled with cryptocurrencies

While crypto payments would help Petróleos relieve some of the debt it has towards its suppliers, the government seems keen on using cryptocurrencies at any cost.

Bloomberg’s sources, which the publication claims are four people with direct knowledge of the matter, said that the central bank was also studying proposals that would allow cryptocurrencies to be counted toward international reserves.

The country has seen its foreign-currency reserves drop to a 30 year low and are estimated to be at around $7.9 billion. They weren’t depleted overnight, though. Bloomberg’s data showed that Venezuela had more than $24 billion in foreign currency in the third quarter of 2014. Towards the end of the year, the reserves began plummeting and have reached their current level at the beginning of 2019. 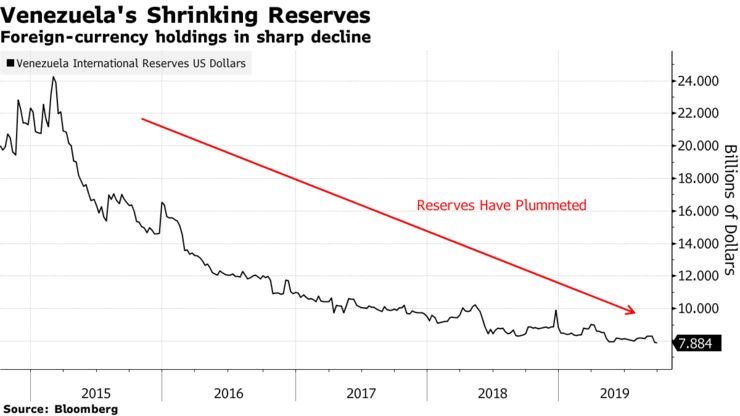 While using cryptocurrencies to pay suppliers would let Venezuela circumvent international banking sanctions, finding companies that would accept payments in crypto will be hard. The country could use a crypto exchange or an OTC trading desk to exchange its Bitcoin and Ethereum reserves into fiat, but it would require complying with extensive KYC and AML regulations.

However, the country won’t be able to keep its crypto holdings a secret for much longer. The government will have to disclose information about its holdings to the National Assembly in January 2020. If the U.S. and the E.U. were to implement countermeasures that would prevent the use of crypto by Venezuelan’s central bank, it would most likely happen at the beginning of the year.

The post Venezuela could hold BTC and ETH in its international reserves appeared first on CryptoSlate.

You may have missed

Headache Of Timing The Crypto Market!!!